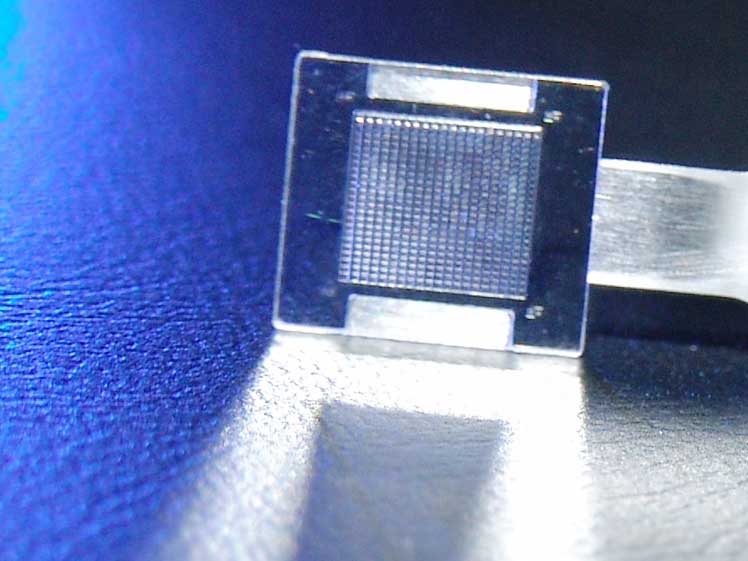 Microlens arrays are one- or two-dimensional arrays of small lenses called lenslets. Usually, the lenslets form a periodic pattern of square or hexagonal type. The outer transverse is often a square or potentially a rectangle or circle. There could be thousands or even millions of microlenses available.

A micro lens array can come as a separate optical component. Some are available in a mounted form. For instance, they can be surrounded by a metal or polymer part that fits into standard optical mounts. Often, both sides of the lenses are equipped with anti-reflection coatings. In some instances, the lenses are realized as a thin transparent structured layer connected to flat, homogenous glass or semiconductor substrate. Some microlens arrays are a part of a bigger assembly. For instance, some charge coupled devices (CCDs) and Complementary metal–oxide–semiconductor (CMOS) image sensors have one microlens per photodetector to increase the light collection efficiency. Incident light needs to be concentrated to the active areas, which cover just a part of the chip area.

Microlens arrays can differ in many aspects. While the lenses are often circular, some arrays have cylindrical lenses. It is important to keep in mind that even lenses that focus on both directions can come with a square geometrical shape. Moreover, microlens arrays can be optimized for various spectral ranges such as for visible light and/or parts of the near-infrared. This impacts the choice of optical material and the anti-reflection coatings.

Every lens is characterized by its focal length and diameter. The focal length’s homogeneity over the full device area can be significant. Also, the amount of optical aberrations can be relevant for imaging applications. Sometimes, aspheric lenses are used to reduce aberrations.

How Microlens Arrays are Fabricated

Often, lens arrays are produced using a micro-fabrication method that forms all microlenses in one production step. For instance, a photographic material may be employed where the pattern of the lens is defined by a photolithographic mask that can be binary or grayscale.

Sometimes, the surface tension phenomenon is used to get smooth and repeatable lens surface shapes. This results in a surface that is generally non-spherical and not necessarily ideal in terms of optical aberrations.

Furthermore, laser material processing can also be used to form just a lenslet at a time or some number of the wit the use of multiple processing beams. These methods offer significant versatility; however, they are slow and expensive in general.

3 Stuff That Your IT Consulting Company Should Offer

Improving The Security Of Your Business

What is room scheduling software, and what are its benefits?

Ways Micropayments have helped during the pandemic

Cloud Security Services Providers: How to Choose the Right One?

What is room scheduling software, and what are its benefits?

Ways Micropayments have helped during the pandemic

Cloud Security Services Providers: How to Choose the Right One?

CVV codes can be purchased in a variety of ways.

Getting The Best Out Of Outdoor LED Display